Safe drinking water in an urban city has been a great challenge for the human population. Consumption of contaminated water may lead to the occurrence of several diseases. Enterotoxigenic Escherichia coli (ETEC) is an enteric pathogen that can survive even in treated drinking water and cause watery diarrhea. The pathogen harbors virulent and drug-resistant genes responsible for its virulence and antibiotic resistance. Persistence of such strains of ETEC is often associated with disease outbreaks. The present work involves the drug-resistance pattern of ETEC, isolated from drinking water. Zinc Oxide nanoparticles were synthesized using a chemical method and their antimicrobial effects were assessed against drug-resistant strains. In order to increase the antimicrobial efficacy of nanoparticles, guava leaf extracts were used and their synergistic study with Zinc Oxide nanoparticles was carried out. Results showed the prevalence of drug-resistant ETEC in the drinking water of Gwalior city. Our study further indicates the potential antimicrobial activity of Zinc Oxide nanoparticles in synergy with guava leaf extract against ETEC. ‎‎

Water is the most important resource for living organisms. Human beings are completely dependent on water for various purposes. Consumption of contaminated water has always been associated with water-borne infectious diseases. These include diarrhea, typhoid, cholera, etc. (Mourad et al., 2019; Tomar et al., 2018). Rapid industrialization and urbanization have often led to the deterioration of microbiological quality of water. Even in urban settings, the drinking water has been contaminated. Escherichia coli and its pathotypes are some of the major habitants of water. Among them, enterotoxigenic Escherichia coli (ETEC) is mainly responsible for infectious diarrhea and other enteric diseases. India stands among the countries which contribute more than half of the total deaths due to ETEC infections (Anderson et.al., 2019; Tomar et.al., 2016; Agarwal et al., 2014). Almost 17 million cases of watery diarrhea and 600,000 associated deaths occur annually. Consequently, identification of critical contamination factors for the distribution of drinking water is necessary (Jyoti et.al., 2015).

The LT-1 gene encodes the heat-labile enterotoxin protein (Tomar et.al., 2018; Huang et al., 2018). Enterotoxigenic Escherichia coli harboring LT-1 gene has been identified in drinking water using molecular methods. Prevalence of Escherichia coli strain in surface and drinking water has been demonstrated by a conventional PCR assay targeting the LT-1 gene. A number of studies have been reported for quantification of ETEC in water, food, and clinical samples (Otazo et al., 2019; Esfandiari et al., 2017; Wang et al., 2017; Jyoti et.al 2010). The occurrence and prevalence of ETEC strain in drinking water continue to be a major threat to public health. Enterotoxigenic Escherichia coli causes gastroenteritis with profuse watery diarrhea accomplished with abdominal cramps. ETEC induces illness through the production of two enterotoxins, heat-stable toxin and heat-labile toxin. Both affect electrolyte transport resulting in exercise fluid loss. The infectious dose of ETEC is high, with approximately 108 CFU required to cause infection. The incubation period of Escherichia coli of this group is 12-72 hours, with a duration of 3-5 days of illness. These infections are one of the major causes of death in children below the age of 5 years in developing countries. Immune compromised individuals often develop traveler’s diarrhea which manifests as a brief episode of loose stool accompanied by nausea and abdominal pain. Traveler’s diarrhea affects up to 60% of people visiting tropical countries and of these, about 20-40% occurs due to ETEC. The prevalence of watery diarrhea is alarming for developing and developed countries. India has been categorized under the high-risk zone for watery diarrhea caused by ETEC.

In India and other developing countries, the diagnosis of pathogens is based on antimicrobial drug resistance profiling and virulence gene profiling. Frequent use of antibiotics to kill pathogens in previous decades has led to the emergence of resistance in microbes. As a result, the drug-resistant Enterotoxigenic Escherichia coli persists in the environment (Canizalez-Roman et al., 2019; Flahertya et al., 2019; Lupo et.al 2012). The significant use of antibiotics has generated and disseminated drug-resistance in the environment and drinking water system.

Naturally available products have higher efficacy against pathogens, and they are safe. Guava is one of the most common fruits in tropical and sub-tropical regions. Guava leaf contains bioactive molecules that can fight against pathogens. Several studies have been done on the antimicrobial properties of guava essential oil and solvent extract (Kim and Fung, 2004; Jairaj et al., 1999; Ibrahim et al., 2011; Hoque et al., 2007). Exploration of Guava leaf extracts and nanoparticles for effective antimicrobial naturally available products need to be explored in combination with nanoparticles.

Drug resistance profiling was done at the phenotypic level using the disc diffusion method. Positive isolates from each site were selected for screening against antimicrobials. A total of six sites were found to be positive for the presence of ETEC and isolates were used against different antibiotics from seven different classes as per the Clinical and Laboratory Standards Institute (CLSI) guidelines. These include, Ampicillin (10 µg/disc), Ampicillin/Sulbactam (10/10 µg/disc), Amoxiclav (30 µg/disc), Azithromycin (30 µg/disc), Bacitracin (10 µg/disc), Cefixime (5 µg/disc), Clindamycin (10 µg/disc), Chloramphenicol (30 µg/disc), Moxifloxacin (5 µg/disc), Metronidazole (4 µg/disc), Ofloxacin (2 µg/disc)و and Rifampicin (5 µg/disc). Each test was performed in triplicate. Data for antibiotic resistance for each isolate were summarized as resistant (R), reduced susceptibility (Intermediates) or sensitive (S), based on CLSI guidelines. Escherichia coli (MTCC 723) was used as the positive control.

Zinc Nitrate (Zn (NO3)2·6H2O) and Potassium Hydroxide (KOH) were used for the synthesis of NPs. Briefly, 0.2 M aqueous solution of Zinc Nitrate was put into 100 ml of HPLC grade de-ionized water under vigorous stirring. Various proportions of 0.4 M Potassium Hydroxide were added into the above aqueous solution. The flow rate maintained was one drop per sec and after adding, the flask was kept for stirring for 2 h, resulting in a colorless to a white aqueous solution at pH 12. The mixture was allowed to stir for 2 hours on a magnetic stirrer. The precipitate was then taken out and washed again and again with HPLC Grade de-ionized water followed by ethanol and acetone to remove the impurities. Selective precipitations of nanoparticles were carried out by centrifugation with a solvent containing acetone. Finally, the precipitate was dried overnight at 80oC. Synthesized nanoparticles were further characterized using UV-visible Spectroscopy and Transmission Electron Microscopy.

Synthesized nanoparticles were characterized using various biophysical techniques. Nanoparticles (NPs) were scanned in the Ultraviolet-Visible range using a double beam spectrophotometer (Wensar). To verify the reduction of metal ions, the solution was scanned in the range of 200 to 700 nm. Samples after preparation and preliminary characterization were sent to Sophisticated Test and Instrumentation Centre (STIC), Cochin, Kerala for further characterization. The size and particle distribution of nanoparticles were analyzed using Transmission Electron Microscopy (TEM).

Enterotoxigenic Escherichia coli has a high infectious dose of > 108 colony-forming units (CFU) (Nataro et al., 1995). In order to check the antimicrobial efficacy of synthesized nanoparticles, the infectious dose of ETEC was established.

The antimicrobial activity of NPs was evaluated against ETEC by well diffusion method. Approximately, 108 CFU of ETEC were inoculated on agar plates and different concentrations of ZnO NPs were added, starting from 128, 64, 32 to 16 µg/ml of to the wells present in agar plates. A control plate was also prepared without nanoparticles. Plates were further incubated at 37oC overnight. After incubation, the plates were observed and zones of inhibition were recorded.

Guava leaves were collected from a local nursery and identified from Botanist. Samples were kept in plastic zip lock bags and labeled appropriately and brought to the laboratory for extraction. Leaves were washed under tap water, dried and kept into a blender for grinding. The leaf powder was added to the ethanol solvent to make 99% concentration. The mixture was made in sterile Erlenmeyer flask and wrapped in aluminum foil to avoid evaporation and light exposure for 72 hours. The flask was placed on a shaker at 70 rotations per minute. After 1 day soaking in the solvent, the mixture was centrifuged for 15 minutes at 8000 rpm at 25oC. The supernatant was collected and incubated at 4oC for further use (Biswas et al., 2013).

Synergistic effects of Nanoparticles and Guava leaf Extract against ETEC

All the positive strains of ETEC were analyzed for drug resistance profiling. It was primarily determined by using the agar disc-diffusion method according to Clinical and Laboratory Standards Institute Guidelines (Balouiri et al., 2016).

Drug resistance profiling was performed using the disc diffusion method at the phenotypic level (Figure 1). The selected drug-resistant strains showed high resistance against Clindamycin, Cefixime, Chloramphenicol, Azithromycin, Ampicillin/sulbactam, Metronidazole, Ofloxacin, Ampicillin, Amoxiclav, Bacitracin, Rifampicin, and Moxifloxacin (Table 1). A similar resistance pattern was also observed in the case of Enterotoxigenic Escherichia coli which has also been isolated from potable water (Agarwal et al., 2015). However, intermediate to Ofloxacin, Moxifloxacin, and Rifampicin was observed among some isolates. Resistance to Bacitracin and Metronidazole in ETEC isolates has been reported previously. It was found that some of the clinical isolates of E. coli, isolated from poultry are commonly resistant to multiple antibiotics (Yassin et al., 2017). Some of the strains were found to be sensitive against chloramphenicol, Azithromycin, Ampicillin/sulbactam, Amoxiclav, Ampicillin, clindamycin, cefixime, Ofloxacin, Moxifloxacin, and Rifampicin. The antibiotics such as Amoxiclav (44 mm), Ampicillin (40 mm), Chloramphenicol (24 mm), and Ampicillin/Sulbactam (38 mm) were most effective against the ETEC isolates. These antibiotics are of the same group which is broad-spectrum antibiotics. The maximum zone of inhibition (40 mm) was attained by Ampicillin. ETEC isolates showing resistance against the majority of antibiotics are crucial and alarming. The aquatic ecosystem could serve as a reservoir of antibiotic-resistant pathogens through horizontal gene transfer.

The size of Zinc Oxide NPs was in the range of 15 to 30 nm as evident from Transmission Electron Microscopy. Nanoparticles were spherical (Figure 3). 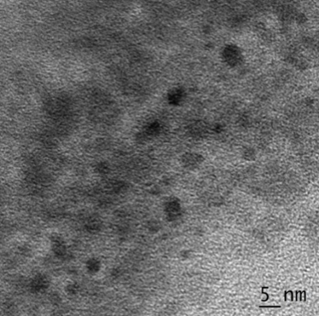 Determination of antibacterial test for nanoparticles

In summary, the occurrence of drug resistance in ETEC harboring virulent genes in potable water signify that these environmental ETEC strains could significantly contribute to the wide-scale transfer of virulent and resistance genes into aquatic and other healthy environments. This can lead to potential health hazards to humans and animals which are dependent on water sources. This could play a major role in the epidemiology of antibiotic resistance in Gwalior for the emergence of emerging and re-emerging diarrheagenic diseases. ZnO-NPs were synthesized by chemical reduction method. Synthesized ZnO-NPs show enhanced antibacterial properties as compared to conventional antibiotics. Further, the synergistic effects of ZnO-NPs were studied using Guava leaf extract against ETEC and was found effective. We can visualize that this study offers novel insights into antimicrobial actions of ZnO-NPs and also demonstrates ZnO-NPs as a novel class of contemporary antimicrobial agents for the treatment of waterborne infectious diseases. Further, the study could be used for the surveillance of potable water resources and the development of risk assessment strategies for the protection of public health.

Agarwal, M., Jyoti, A., and Tomar, R.S. (2015). Prevalence of antimicrobial resistance and virulence determinant of Salmonellae isolated from potable water. International Journal of Pharma and Bio Sciences, 6(4), (B) 997-1004.

Kanjikar, A. P. (2019). On Anti-Diabetic Potential of Phyto-nanoparticles Comparison with Hormonal Therapy and Medicinal Plants. International Journal of Pharmaceutical and Phytopharmacological Research, 9(1), 103-111.

Khlebtsov, N., and Dykman, L. (2011). Biodistribution and toxicity of engineered gold nanoparticles: a review of in vitro and in vivo studies. Chemical Society Review, 40, 1647–1671.

Lupo A., Coyne S., Berendonk T. U. (2012). Origin and evolution of antibiotic resistance: the common mechanisms of emergence and spread in water bodies. Frontiers in Microbiology 3:18